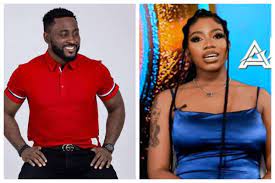 In a twist, Big Brother carried out a fake eviction on Pere and Angel, a move believed to spice up the show, leaving both housemates to battle for the soul of the final slot for the grand finale of this season’s shine ya eye game.

In the twist, Big Brother told Pere and Angel to play a game.

The game would determine who move into the house as the final housemate to compete for the money.

They are to disassemble a truck. Lose 23 screws and 54 body parts. On the analytics chart for voting, it showed that Pere had more votes than Angel but seem Big Brother wants to give Angel a chance to compete for the money as well.

Until a winner emerges from the game, Liquorose remains the last girl standing on the show for now.

Meanwhile, The first housemate to leave Big Brother house is Queen. Queen was one of the housemates that came in with Kayvee, Michael and JMK.

Queen said she wants to go into governance and also continue with charity works.

The second housemate to leave Big Brother’s House is Nini. Nini Singh, explains her relationship with Saga, she says they are just friends, she says she is in a relationship.

She says she is focusing on her fashion brand.

The third housemate to leave Big Brother’s House is Saga. He talks about his relationship with Nini, he said he understands that

Nini has a boyfriend but there are many things left unsaid between them.

He said he wants to focus on everything fitness and would want to open a fitness app.

The fourth housemate to leave Big Brother’s house is Angel.