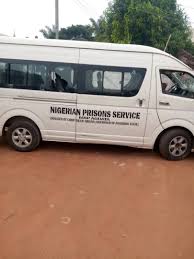 Two staff of the Nigeria Correctional Service, NCS attached to Ekwulobia Prisons in Anambre State melt their untimely death in the hands of unknown gunmen in the state.

The two men were on duty, escorting a van conveying inmates of the prison to the court for hearing at about 11am on Friday, when the unknown gun men attacked them.

The previous day, two policemen and three soldiers had also been killed by unknown gunmen, in two locations in the state, with their arms carted away, while a police van was set ablaze.

We also gathered that at about 4am on Friday, a police station in the same Ekwulobia was attacked by gunmen but the attack was quickly repelled by officers on duty.

Ekwulobia station is among the police stations razed during the EndSARS protest and was recently rebuilt.

The Public Relations Officer of the Anambra State Command of the Nigeria Correctional Centre, Mr Francis Ekechukwu confirmed the attack, saying the command was devastated by the news of the attack.

“You know this (attack) has been on for sometime now, but we never envisaged it will get to us. Yes, there was an attack on our men, and two persons were killed. One of them is our staff, but the other is not.

“We are still investigating. We will issue a press release about this soon, but for now, we are trying to unravel how it happened and to go after the criminals. It was a gun duel, but two people were killed as a result,” Ekechukwu told journalist.

The spokesperson of the state Police Command, DSP Toochukwu Ikenga also confirmed the attack on Ekwulobia station but added that the men on duty overpowered the attackers, causing them to flee.