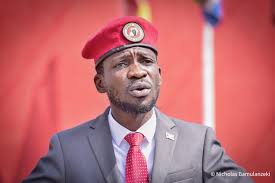 Popular Ugandan opposition politician Robert Kyagulanyi, also known as Bobi Wine, has been ordered to pay $166,700 in taxes for an armoured car donated to him by his supporters living abroad.

The Uganda Revenue Authority said the details of the car had been misrepresented causing it to be undervalued.

The new bill is $142,000 more than what was paid for the vehicle, a Toyota Land Cruiser V8, in taxes when it was cleared by the tax authority.

Bobi Wine protested about the bill on Twitter, saying that when you fight against President Yoweri Museveni all state institutions gang up against you.

He lost against Mr Museveni in the general election in January.

The campaigns were marred with violence and arrests of mainly opposition supporters.

Bobi Wine took to wearing a bullet proof vest and helmet on the campaign trail.