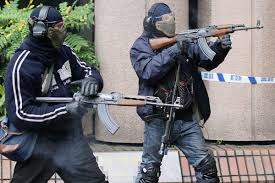 The attack on Police formations in recent times, is a worrisome situation in a country that is faced with multiple security problems. This has gone unabated.

On Saturday, unknown gunmen attacked a Divisional Police station in  Umuelemai in Isiala Mbano local government Area of Imo state. The attack which happened around 07:56 pm, captured that the armed men also drove to the Secretariat in Ihitte Uboma local government area of the state and shot sporadically in the area.

Some eyewitnesses in the affected areas, said that the hoodlums were wearing a red barret and black attire up and down while some wore jean trousers.

The unknown gunmen were heard saying and shouting, “we owe the land, this is our land they must leave and we will rule our land by ourselves”

The eyewitness went further to say: “They attacked the police station and all the police officers ran for their lives and hide somewhere until the boys finished operation.

“They went into the station did whatever they liked and collected some guns and left. They even injured some people. As I am talking to you nobody is around the area our people have ran away and abandoned their properties.

“Some people were injured as they were running for their lives. These people are shooting heavily. You cannot stand them.

In our bid to reach the Police Public Relations Officer, PPRO, Orlando Ikeokwu, was not successful as his phone was said to have been switched off.