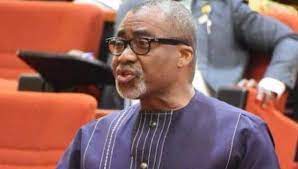 On Tuesday, in the National Assembly, the minority caucus of the house lamented the manner at which the president, President Muhammadu Buhari, is silent over the insecurity in the country.

The caucus also said the way and manner at which the ruling All Progressives Congress, led Government is presiding over the affairs of the country, is a breach of the country’s constitution.

Senator Enyinnaya Abaribe who is the leader of the minority caucus stated this at a media briefing in the nation’s capital Abuja, Senator Enyinnaya also said that the caucus will soon come up with a workable solution that will save this country from total collapse, from the hand of the ruling party APC.

“We have not heard from our President despite the daily killings that are going on and have turned Nigeria into a killing field of unimaginable proportion.

“Therefore, the caucus has taken note and will continue to take note of the constitutional breaches that is happening at this time by the government of the APC and will at the appropriate time utilise all constitutional methods and measures available after consultation with our colleagues to do the needful to save the country from collapse.

“We also as a caucus want to put on notice to all Nigerians and the international community about the threat to the lives of our members that comes out to say things that are true about the state of Nigeria today and these threats have come in various forms, including the threat to life.

The submission of the minority caucus comes on the heels of increased security challenges in the country with the herder-farmer and insurgency in the northeast region and north central, the middle belt, banditry in the northwest, and separatist tensions in the southeast.