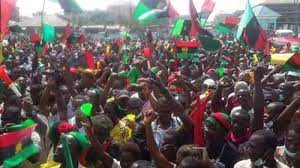 The Indigenous People of Biafra, IPOB, has replied the allegation by the presidency that the group is stockpiling arms. The National Publicity Secretary, Emma Power said the group is producing its arms locally, by its people and he said it is a great innovation.

He made this remark while denying the allegation of stockpiling arms and bombs. This denying was contained in a chat, were he said  “We are not stockpiling any arms anywhere”

“Fulani government of Nigeria can rant and propagate falsehood against IPOB, we don’t buy arms we produce arms we are going to use locally and we made it clear to them that 1967 and 1970 are not the same thing with 2021.

“Our leader Mazi Nnamdi Kanu prophesied that they will kill us and we’ll kill them at the end Biafra nation will come.

“There is no false information and state-sponsored propaganda that can stop or change our resolve to restore Biafra freedom from Nigeria. What they did to our fathers, this present generation of Biafra will surprise them heavily.”

Shehu had made the comments following Twitter’s decision to delete Buhari’s offensive tweet.