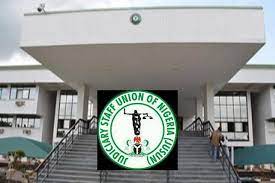 If the offices of the governors are a creation of the Constitution, why are those who occupy them continue to violate the provisions of the same law in respect to financial autonomy for the judiciary? Asks Davidson Iriekpen

For another week last Friday, courts across the country remained closed after the meeting between the umbrella body of judiciary workers in Nigeria, Judiciary Staff Union of Nigeria (JUSUN) and representatives of the federal government ended with no concrete solutions. The meeting was postponed again to this week.

The workers have been on strike since April 6 to press home their demands for a complete financial autonomy for the judiciary.

At the meeting to end the lingering crisis last Thursday, the Minister of Labour and Employment, Dr. Chris Ngige, reiterated that the federal government had no problem with the issue of financial autonomy for the judiciary. He said the appropriate laws for judiciary autonomy have been signed into law and that implementation lies with state governments and governors.

Years of financial strangulation, and a brazen subversion of the constitution, have driven the judiciary to impotence, incapacitation and impoverishment.
Incidentally, with the exception of governors, who now find themselves prevaricating over unambiguous constitutional provisions, no Nigerian is opposed to JUSUN or their strike. So far, the industrial action has been tremendously effective, totally grounding the country’s groggy justice system, and is more effective than any the Nigeria Labour Congress (NLC) has ever organised in the past two decades.

The attendant consequences of the strike have left non-litigants, who are largely business people, reeling from the courts closure. Court users and non-litigants, alike, have been venting their anger and frustrations as life becomes more difficult with the nationwide shutdown of the entire third arm of government entering its fifth week today.

While the federal government feels that it has since complied with the relevant sections of the constitution, which grants financial autonomy to the judiciary, and the various judgments regarding complete autonomy for the judiciary, the state governors have refused to follow suit.
President of the union, Comrade Mustapha Marwan, who spoke with journalists in Abuja recently, said the state chief executive officers have frustrated financial autonomy for the judicial arm of government. He added that this situation has left magistrate and customary courts across the country in a sorry state, with dilapidated court buildings not suitable for court sittings.

Section 121(3) explicitly provides that, “Any amount standing to the credit of the judiciary in the Consolidated Revenue Fund of the State shall be paid directly to the heads of the court concerned”. If the Constitution is very clear on an issue, it begs the question why the Governors have chosen to take the path of executive recklessness.

Incidentally, the sacred provisions of the Constitution in respect to financial autonomy of the judiciary have been given judicial blessing by the courts. In cases separately filed by JUSUN and Dr. Olisa Agbakoba SAN against the federal government, the court upheld the financial independence of the judiciary as a constitutional stipulation that cannot be waived or varied by the executive. This, still did not change anything.

But last year, sensing that the state governors were not willing to comply with neither the constitutional provisions nor the court judgments, President Muhammadu Buhari issued Executive Order 10 of 2020 to compel the states to obey the constitution, the governors coaxed the president to tarry a little on gazetting the order, thus stymieing the immediate implementation of the order.

While it is not clear why that anomalous stricture of gazettes had to be introduced, nor why it is needed especially, in clear constitutional cases, the governors seized upon that hiatus to go to court to litigate and forestall the Executive Order, as if the order was the issue, and not their violation of the constitution. The case is pending before the Supreme Court.

What the governors have issues with is perhaps the concomitant amendment in the same Section 121 (3) of the 1999 constitution, which also gives the states legislature financial autonomy. State governors have since seen the autonomies granted the judiciary and legislature as a complete castration of their powers and imperial persons.

For decades they had subjugated the other two arms of government. They fear that if the other arms no longer had to make recourse to the executives for their financial needs, they would look the governors in the eyes and check their excesses with great daring and gusto. The governors may have reservations about judicial financial autonomy, but what ails them more is the freedom which that financial autonomy would give the state lawmakers, freedoms that might conceivably include impeaching any lawless governor.

To many, the refusal to grant financial autonomy to the judiciary by the governors speaks volume of the level of unconstitutionality, lawlessness and impunity the country deals with. Therefore, they believe that the state chief executives cannot cherry-pick what aspect of the constitution to obey,neither can they set a particular time to obey the constitution.

To put it straight, Ogun said, “The Consolidated Revenue Fund of the state, established under Section 120 of the Constitution, is not a personal property of the executive. It belongs to the executive, legislature and judiciary. So, keeping what rightfully belongs to other arms of government is an abuse. The offices of the governors are a creation of the law and those who occupy them cannot continue to whimsically act as though they are above the law.”
Knowing the recalcitrant position of the governors had taken all along on this issue, many observers are anxiously waiting to see how the dispute would be resolved.