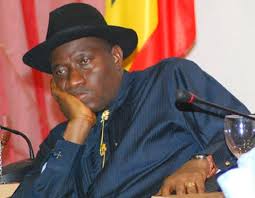 Nigeria’s former President, Dr. Goodluck Jonathan has revealed why he is very sad.

Jonathan said he is sad because of the sudden demise of Pastor Dare Adeboye, one of the sons of the General Overseer, Redeemed Christian Church of God (RCCG), Pastor Enoch Adeboye.

Dare Adeboye died in his sleep on Wednesday night and his death has thrown the entire RCCG family into mourning.

Jonthan commiserated with Adeboye, over the sudden death of his son.

In a message of condolence to the General Overseer and RCCG members the former President expressed sadness over the passing on of the pastor, describing him as a much loved clergyman.

Jonathan further noted that the deceased man of God lived a life that was a pattern of good works and prayed God to grant his soul eternal rest.

In the message, the former President said: “My family and I condole with Pastor Enoch Adeboye and the entire membership of the Redeemed Christian Church of God, on the death of Pastor Dare Adeboye, son of the General Overseer, and a much loved clergyman.

“Though I never knew Pastor Dare personally, I have had cause to meet his father, Pastor Adeboye, and it would seem that the apple did not fall far from the tree.

“From every account, Pastor Dare lived a life that was a pattern of good works and a credit to the Body of Christ. He was known to emulate the godliness and moral leadership that his father is well known for.

“We share in the grief that naturally comes when such a devout man passes on to eternal glory. May God grant his family and ministry the fortitude to bear the loss.”