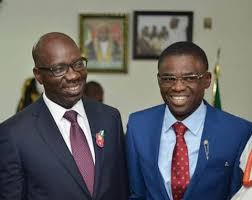 Oshiomhole during the September 19,2020 governorship election in the state. Shaibu spoke in Benin yesterday  at reception organised by the  out-gone local government chairmen in the state shortly after their  Thanksgiving service at St. Paul Catholic Church.

He said they started the revolution of  not placing Edo in the hands of Individuals that will  mortgage their collective heritage and wealth and be flying jets all over  under Oshiomhole’s administration as governor of the state.

He said, “We said there must be a change and that godfathers must be brought to their kneels and people must decide who lead them while leaders must be accountable to the people and not few godfathers.

“But, along the line people that don’t believe in it fall by the road just like the way Oshiomhole fell by the road side because he didn’t actually believe that we should make poverty history in Edo. “Even the commissioners, SSAS and some local government chairmen that resigned from our cabinet didn’t believe in the course because if they do the fight then was needles,”.

He said ” for me people said I am loyal to Obaseki, but I am  loyal to a course I believe in, “I was brutalised, Injured and had my kneel and everything  replaced under Oshiomhole’s administration, all this was that some godfathers wanted to derail our making poverty history in Edo, so we fought on the side of the people and the beneficiary of that struggle was Oshiomhole,”.

He commended the out-gone chairmen for not betraying the people and the course they believe in to join the godfathers even after they were offered jeeps and millions of Naira.

He urged the people to believe in the administration of governor Obasaseki, saying  replaced politics thuggery with a new political system when individuals meet, plan strategize and make it plain for the benefit of the people.

Earlier, the Chairman Association of Local Government in Nigeria, Edo state chapter, Jekins Osunde, commended the state government for given them the free hands to run the councils. He noted despite the challenge of COVID-19 pandemic and dwindling allocation, they still delivered on their electoral promises.