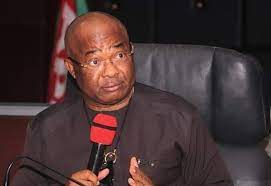 This is coming after attacks on the correctional centre and police station as well as the killings of innocent people by members of the Indigenous People of Biafra (IPOB).

BBC Hausa reports that the northerners are now living in fear in some parts of the state, an incident that has forced many of them to return to the North.

A northerner doing business in the state, Alhaji Iliyasu Sulaiman, told BBC Hausa that his younger brother was shot dead and that three other northerners were injured in Orlu town.

“We buried eight people and six others are receiving treatment in the hospital.

“We don’t know the cause as we did not engage in any fight with anybody but they are killing our people anyhow. My younger brother was just sitting with his three friends and they shot at them, killed him and injured the other three,” he said.

He said the incessant killings had forced over 100 people to return to their states of origins within the last two weeks.

“So far, I know about 60 people that went back to Sokoto, more than 20 others also from Kano and Katsina have gone back and some are preparing to go too,” he said.

Alhaji Sani Ahmad Mai Rago said the deployment of security personnel to the Hausa community in Owerri was not enough as only 30 per cent of them were secured in the area.

He said there is a need to provide more security as many were killed while doing their businesses, adding that some of them are now living indoors because of fear of the gunmen.

“There is a need to provide adequate security everywhere if really they want to address the problem. Honestly speaking, we are living in fear. As I’m talking to you now, I didn’t go anywhere today,” he added.

BBC Hausa reported that efforts to reach the Commissioner of Police in the state, Nasiru Muhammad, was not successful as calls and text messages to his line were not replied to.

Meanwhile, Governor Hope Uzodimma of Imo State has assured the northern community in the state of the government’s determination to protect them and their property.

Also, the Senior Special Assistant to the Governor on Gender and Vulnerable Persons (Men) and the Garkuwan Hausa (shield of Hausa community), Imo State, Hon. Sulaiman Ibrahim Sulaiman, described as untrue reports that the Hausa are leaving the state.

He described Imo State as the safest place for them to live.

The governor, who also debunked the rumour that the northern community in Imo were leaving in droves, said that they had no need to leave, adding that they are part and parcel of Imo State.

Uzodimma, therefore, promised to enhance the security in all the places they reside in Imo State.

Earlier, the leader of the delegation, Alhaji Adamu Baba Sule, told the governor that they came to give both moral support and pledge their solidarity.