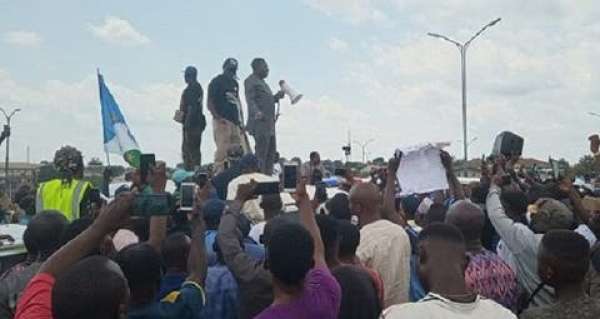 Co-organisers of the Yoruba Nation rally, Ilana Omo Oodua (IOO), have vowed to proceed with or without Sunday Igboho.

The gathering is scheduled for Saturday July 3 in Lagos.

Igboho called off the march on Thursday after Nigerian forces stormed his home in the Soka area Ibadan on Thursday.

But his partners have insisted they will proceed, vowing that no amount of intimidation will make them to bow.

A source in the IOO, a body of self-determination Yoruba groups, said that the rally will go on as planned.

He reacted to an enquiry after the Police warned that no form of demonstration will be allowed in Lagos.

Commissioner of Police, Hakeem Odumosu warned that anyone caught participating will be dealt with within the ambits of the law.

The Gani Fawehimi Freedom Park in Ojota is the venue of the rally.

Speaking, our source close to the 100 leadership dismissed the warning.

“What did you expect the Police to say? They are obeying the federal government. The Police told us not to hold the rally in Ogun and others but we did.

“It’s not compulsory that Sunday Igboho attends. I am telling you now that the Yoruba Nation rally will hold.

“The Ilana Omo Oodua under the leadership of Professor Akintoye already made it clear that we will come out,” he said.