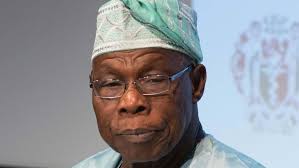 Chief Olusegun Obasanjo Former President of Nigeria said on Tuesday that the country was on the wrong path in improving the economy and also tackling the poverty level of Nigerians.

This submission was made in his goodwill massage to the Nation to celebrate this on the occasion of the yuletide period, at his Presidential Library, Abeokuta, Ogun State,  former president Olusegun cautioned Nigerian leaders to stop blaming God for insecurity, bad economy, poverty and other challenges confronting the country.

Obasanjo said this on Tuesday as the President, Major General Muhammadu (retd.), urged Nigerians to return to agriculture. He said the country’s oil industry was in turmoil.

Some analyst was quick to dismissed Buhari’s statement, saying government was not serious about diversification of the economy. That the agricultural policies of this government is not visible enough to sustains the claim’s, they urged the government to come up with more realistic policy that will revolutionise the country;s agricultural sector.

Obasanjo, who sent his New Year message to Nigerians in an interview with journalists, assessed economic strategies of government.

According to him, with enormous resources available in the country, Nigeria does not have to be poor and no Nigerian must go to bed hungry.

He described 2020 as a year of many challenges, but urged Nigerians to work and pray hard in order to achieve “a glorious 2021.”

He said in his massage that he liked the motto of a school, which say’s work and pray, he said some people say it should be pray and work, former president Olusegun say’s it do not matter the way the phrase are used,

He said we need to work hard in this country and also pray hard, he was for the coming year to be glorious.

In another development. President Buhari say’s he will fight food security in the nation that his administration has done enough in that area, as the country’s oil is in turmoil.

The statement was titled “President Buhari: Government will wrestle food inflation in the coming year.”

Shehu quoted the President as giving his words that his regime would keep a keen eye on food inflation in 2021 while giving a directive to the Central Bank of Nigeria not to give any money for food importation.

He said Buhari directed that the CBN “must not give money to import food. Already,  about seven states are producing all the rice we need. We must eat what we produce.”

The presidential aide said Buhari wondered where the country would have found itself in view of the devastating economic crisis brought about by COVID-19 if the country had not embraced agriculture.

The President stated, “Going back to the land is the way out. We depend on petroleum at the expense of agriculture. Now the oil industry is in turmoil. We are being squeezed to produce at 1.5 million barrels a day as against a capacity to produce 2.3 million.

“At the same time, the technical cost of our production per barrel is high, compared to the Middle East production.”

Buhari was also said to have emphasised the place of agriculture in the efforts to restore the economy but agreed that measures must be put in place to curtail inflation in the country.

“We will continue to encourage our people to go back to the land. Our elite are indoctrinated in the idea that we are rich in oil, leaving the land for the city for oil riches.

“We are back to the land now. We must not lose the opportunity to make life easier for our people. Imagine what would have happened if we didn’t encourage agriculture and closed the borders. We would have been in trouble,” the President added.

According to the statement, the meeting, which was for a review of, and reflections on the global and domestic economy in the outgoing year, was attended by the Vice President Yemi Osinbajo, as well as ministers of finance and humanitarian affairs. It agreed on a number of measures.

The statement read, “In specific terms, it noted the sharp deterioration in international economic environment and its impact on Nigeria’s continuing but fragile economic recovery; that Nigeria’s economic growth continues to be constrained by obvious challenges including infrastructural deficiencies and limited resources for government financing. It emphasised the need to make the private sector of the economy the primary source of investment, rather than government.