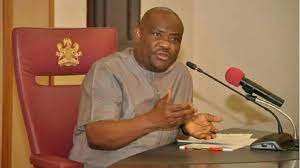 Rivers State Governor, Nyesom Wike has sternly warned the Federal Inland Revenue Service (FIRS) against sabotaging and undermining the state government’s efforts to freely administer its own tax and other related laws in the state.

The Governor in a statewide broadcast on Monday in Port Harcourt, the Rivers State capital warned the federal agency that “those who play with fire risks having their fingers burnt”.

Mr Wike was reacting to a Federal High Court’s dismissal of FIRS’ move to stop the state government from collecting Valued Added Tax (VAT) pending the determination of the matter in court.

Justice Stephen Pam of the Federal High Court sitting in Port Harcourt had dismissed a suit by the FIRS seeking to stop the state government from commencing with the collection of VAT.

FIRS had approached the court seeking a stay of execution on the earlier judgment of the court that stopped FIRS from collecting VAT as it was constitutionally the role of the state government.

In his ruling, Justice Pam said granting the application would negate the principle of equity. He noted that inasmuch as the state government and the state legislature have enacted a law in respect of the VAT, courts were bound to obey the laws.

He noted that the state government and the state House of Assembly have duly enacted Rivers State Value Added Tax No. 4, 2021, which makes it a legitimate right of the state to collect VAT.

The judge said the law remained valid until it has been set aside by a court of competent jurisdiction, adding that the law enacted by the state legislature remained valid

“Today, the FIRS has failed in its attempt to frustrate the enforcement of the state’s law on VAT with the Federal High Court’s dismissal of its application for stay-of-execution of the judgment,” Governor Wike said in the broadcast.

“Consequently, I hereby direct the Rivers State Revenue Service (RSRS) to ensure the full and total implementation and enforcement of this law against all corporate bodies, business entities and individuals with immediate effect.

“All corporate bodies, business entities and individuals are advised to willingly, truthfully and promptly comply with their tax obligations under this law to avoid the full weight of the stipulated sanctions, including having their business premises sealed-up.

“Let me warn that the Rivers State Government is fully in charge of the State and will not tolerate any further attempt by the FIRS to sabotage or undermine our authority to freely administer our tax and other related laws in our own State.”

Governor Wike also frowned at reports of FIRS bulling cooperate bodies and business entities in the state for refusing to pay their tax to the agency.

According to him, “the effrontery and impunity exhibited by the mere FIRS agency without any political authority against the Rivers State Government was ill-advised and highly provocative.”